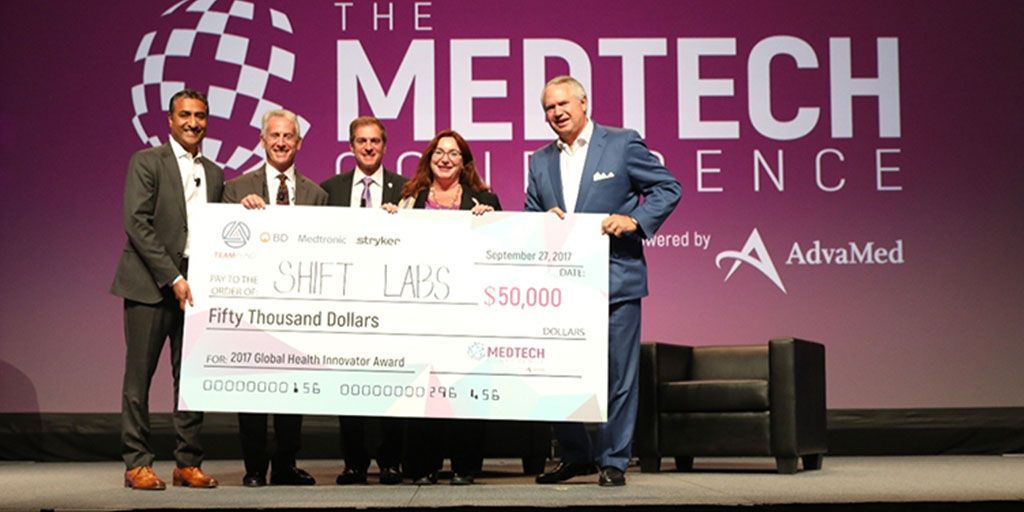 Beth Kolko did not start her career thinking she would be a medical device innovator, much less one under contract with the U.S. Air Force. A professor at the University of Washington’s Department of Human Centered Design and Engineering, Kolko was focused on tapping the creativity of non-experts to solve technology problems in low-resource communities. Toward that goal, she and her students developed a low-cost ultrasound device, successfully prototyping it with midwives in Uganda. When the project’s grant money ran out and no commercial options emerged, the team decided to simply give the technology away. Oddly, no industry players wanted it. Finally, a healthcare executive took Kolko aside and explained what was going on. “He said, ‘We can make cheaper technology, but it wouldn’t support the cost of our sales force,’” she recalls. That sounded like a broken model to Kolko, and so, in 2012, she founded her medical device company, Shift Labs, with its subtly subversive motto: Simple Saves Lives.

In the years since, Kolko’s Shift Labs has continued to challenge conventional thinking, particularly in its opportunistic approach to fundraising. The company’s first product—DripAssist, an award-winning, low-cost device that monitors IV infusions—was developed with the help of the local hackerspace community, backed by crowdfunding and the support of the Fledge and Y Combinator incubator programs. The venture has received a MedTech Innovator award, won grants through the Fighting Ebola Grand Challenge, the Saving Lives at Birth Grand Challenge, and gone through two equity investment rounds.  The company also received support from VentureWell through Xclerator workshops and the DevelopmentXChange to help advance its business model and develop market opportunities in low- and middle-income countries. More recently, Shift Labs pursued and won two Small Business Innovation Research (SBIR) contracts from the U.S. Air Force. The company will use the second, a $750,000 Phase II award it won in September 2019, to develop a wireless version of DripAssist for Air Force medics to use in the field, allowing physicians to monitor injured soldiers remotely. Shift Labs sees numerous other civilian uses for the product as well.

Navigating the often-bewildering landscape of grants and contracts over the years has given Kolko a singular perspective into what each type of funding can offer a venture, and how innovators can best leverage those benefits. Here are some of her insights:

Contracts come with restrictions, but they can also bring unforeseen benefits.

Unlike grants, which are awarded for more open-ended work, contracts are generally more restrictive, and tied to specific milestones and deliverables. As VentureWell’s senior program officer for global programs, Mark Marino, explains, “A contract is a binding agreement to provide goods or services in return for compensation. There are frequent reporting requirements, and payments are based on deliverables and milestones.” Some SBIR contracts require ventures to use government cost accounting, which can mean more overhead (although Shift Lab’s contract did not).

For Kolko and Shift Labs, however, the upside to the contract process was considerable. “It’s non-dilutive funding, paying for research and development,” she explains. “It’s also validation for other partners. When the U.S. military cares enough about your product to want to get it for their personnel, it’s a vote of confidence in what you’re building. And that telegraphs to other customers, as well as to other investment partners.”

Finally, once an SBIR recipient makes it beyond Phase II in the government’s award process, “that means your technology is eligible for sole sourcing by any federal agency. That builds incredible value, because it makes it easy for anyone in the government to purchase your product instead of having to go through a really burdensome competitive bidding process.”

Stay focused on your venture’s goals, but not so focused that you overlook new opportunities.

Striking this balance has been key for Shift Labs, Kolko notes. “You have to be focused as a startup,” she explains, “but there’s a penalty in being too focused and not being opportunistic when things can take you in a direction that can be pivotal for your growth.” Shift Lab’s DripAssist, for example, was not developed with military uses in mind: Its potential in that market was pointed out by a medical advisor, who happened to be an army doctor. Working through the bureaucracy of the military was incredibly challenging, notes Kolko, who credits the efforts of Shift Labs’ research director, Molly Blank, but ultimately the opportunity has helped the company move to a new level.

At the same time, Shift Labs has not let the military relationship divert it from its core mission of creating low-cost devices for the broader healthcare market. A wireless version of DripAssist was already on the drawing board, so the work dovetailed nicely. “When the military showed up and said, we’ll fund you to build this out for the military, we thought, that’s great, because we already know there’s a market on the civilian side,” Kolko explains. “That’s where the focus piece comes in. What they asked for was already on our product development map.”

Understand what the funder wants and frame your funding request accordingly.

Funding agencies have specific agendas, and direct their awards accordingly. For Shift Labs and its DripAssist, that initially proved problematic. “We built a device that’s good for everything, but in the global health world, that’s the same as being good for nothing,” Kolko explains. “The funding is focused on specific silos: Is this for malaria? Is this for HIV? Is this for maternal health?” Having received feedback that their device could bring improvements to maternal health, Shift Labs made that its focus and pursued grant money from the Saving Lives at Birth program, eventually winning one in 2018.

Proving your venture’s value to a funding agency is not always so easy, however, Kolko adds, especially when an innovation is as unfamiliar as DripAssist. “That’s been a continuing challenge,” she says, “because the people who write Requests for Proposals (RFPs) don’t know to ask for this.” As it happened, the Shift Labs team discovered that the Air Force occasionally asks for open-ended proposals for innovations that don’t fit conventional categories. Working through that process, the company was able to secure its SBIR contracts.

Your relationship with the funding organization is as important as the type of funding.

Shift Labs has had positive experiences with both grants and contracts, Kolko says, adding that the funding mechanism, ultimately, has not been the central factor. “The most important thing is the team on the other side that you’re working with, that is ultimately receiving what you produce.” Developing this relationship can lead to valuable connections and opportunities. After Shift Labs received a $330,000 grant from the Fighting Ebola Grand Challenge, for example, the Ebola team became “tireless advocates for our products,” Kolko recalls. Through that connection, she was introduced to contacts at the World Health Organization and Doctors Without Borders, and invited to panel discussions and conferences. “They helped us navigate a very complex world.”

Choose a funding option that gets you closer to your ultimate customer.

Continuing the idea that funding can facilitate important relationships, Kolko notes that one way to assess grants versus contracts is to ask which will help you connect better with your customers.  She notes that grants are often awarded to address problems deemed important by a top-down organization. “So, if your customers are similarly top-down, as they often are in global health—governments, multilateral organizations, people who write standards—grants may be preferable.” On the other hand, if your customers are more bottom up, then maybe contracts are the way to go. “One of the nice things about a contract is, you are interacting directly with your customer.”

Don’t rule out any potential source of funding, even if your venture is established.

For Marino, Shift Lab’s story offers an additional lesson about the importance of innovators not limiting their options when it comes to funding. “You can always apply for non-dilutive funding and other forms of grants that can help you reach specific milestones and accomplish specific goals, such as technical development of the new product,” he observes. “There’s not just one phase, or type, or time where grant money is relevant. For innovators seeking resources from investors, showing a startup has non-dilutive funding such as grants and contracts greatly increases the attractiveness of an investment opportunity.”