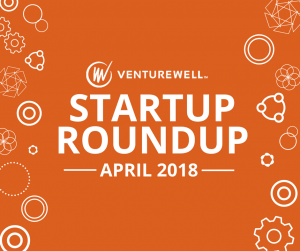 Read the VentureWell Startup Roundup! Each month, we’ll share announcements, accomplishments, and other good news from teams in our community.

Co-Founder and CTO of Hazel Technologies Named 2018 Legacy Prize Winner
The Legacy Prize is awarded to a select group of students who show great promise, creativity, and dedication in their fields, in the spirit of Ben Franklin’s original Legacy Prize. This year’s nominee is Adam Preslar, CTO and co-founder at Hazel Technologies, an E-Team grantee and ASPIRE participant.

BallotReady Raises $1.5M To Expand its Voter Guide Platform Nationwide
Chicago-based BallotReady, a former I-Corps team, has raised $1.5 million in a seed round that will help the company expand its service to all 50 states by the fall midterm elections. Investors in the round include InvestHER Ventures, Wakestream Ventures, New Media Ventures, Hard Yaka, and Grubhub CEO Matt Maloney.

Spread the news! Share the VentureWell Startup Roundup with your network.