Reamonn Soto knew he wanted to be an inventor ever since he saw a space shuttle launch as a boy in Clearwater, Florida. “That really sparked my imagination,” recalls the CEO of Sensatek, the turbine-sensor company he co-founded with Azryana Soto, COO of Sensatek, in 2015. “So, when all the other kids were out playing tag, I was inside wearing a lab coat that my mother had bought me from a thrift store, designing the next Boeing 787.”

Today, that imaginative spark—coupled with business skills acquired through our E-Team and ASPIRE programs—has allowed Soto to grow Sensatek into a business with $2 million in venture funding and six full time employees. Based in Daytona Beach, the company produces high-temperature ceramic sensors that wirelessly transmit a gas turbine’s combustion data in real-time, allowing companies in the energy, aerospace, and manufacturing sectors to reduce engine maintenance costs and avoid expensive breakdowns. 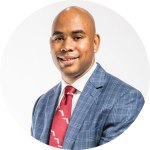 “When all the other kids were out playing tag, I was inside wearing a lab coat that my mother had bought me from a thrift store, designing the next Boeing 787.”

The venture began as Soto’s student project when he was earning his master’s in aeronautics from Embry-Riddle Aeronautical University, where he won numerous entrepreneurship awards, including the Embry-Riddle Aeronautical University Launch Your Venture Competition and the PowerGen International 2019 pitch competition. He also has applied training experience in astrophysics and condensed matter physics.

As important as his technical training has been to his venture’s success, Soto also credits the business skills he learned through our Early-Stage Innovator Training program. “Not just knowing the fundamentals, but knowing how they all work together,” he explains. “Like when they’re asking for a cap table, I actually have a decent cap table. When they’re talking all of these investor terms, I actually know enough to ask the right questions. I think my investors were pretty impressed that someone with a science background actually could understand the fundamentals. And I think that that gave them a lot of confidence to put their hard-earned money into the company.” Through our early-stage training program, Soto was also introduced to sustainable design principles, and Sensatek is now exploring how to incorporate recycled components into the design of their products.

That young inventor in the thrift store lab coat always had an entrepreneur’s instincts—Soto built and repaired computers in high school and owned an automotive shop after graduating from college and serving in the Marines. But he says it was VentureWell that gave him the knowledge and confidence to lead a growing company to the next level. “It really armed me with the tools and the equipment that I continue to use on a daily basis to achieve purpose through uncertainty,” he says. “How do you now turn that invention into a sustainable business that can create jobs and have a really large impact on society? I appreciate VentureWell for guiding that process.”

In the meantime, Sensatek continues to generate interest: in March 2019 it received a $743,200 Small Business Innovation Research (SBIR) Phase II grant from the National Science Foundation, followed in June 2020 by an Air Force Small Business Technology Transfer Phase I Award of $50,000, for work on sensors that will monitor the condition of airplane turbine blades.

Read more about Sensatek’s journey from idea to market and the benefits of the E-Team Grant Program.