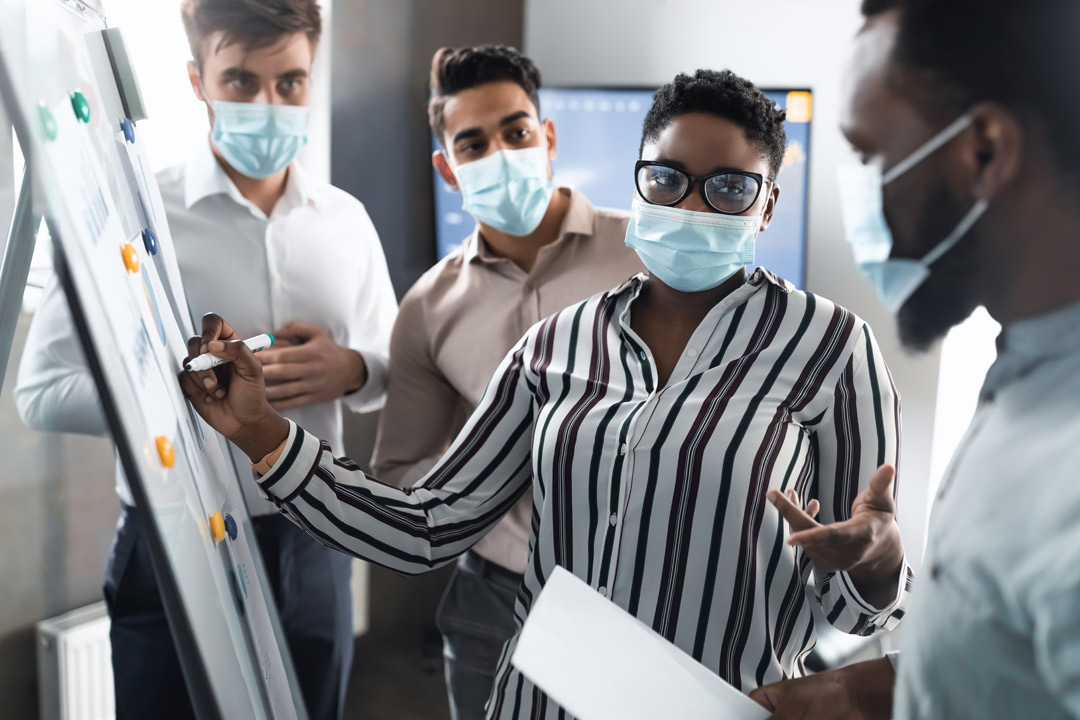 When it was founded in 2014, the Lincoln, Nebraska, diagnostics firm MatMaCorp focused its business on the pressing local need of helping farmers test livestock for often-devastating viral diseases. With the outbreak of COVID-19 in early 2020, however, the company recognized that its portable and user-friendly “pen-side” virus-testing technology might be adapted to help an even more urgent need: providing COVID testing for those same farmers and their rural neighbors.

“We started receiving a lot of calls from colleagues and friends in rural communities that were facing a long wait time for COVID-19 tests and test results,” recalls MatMaCorp CEO Phil Kozera. “It was really impacting their businesses, schools, and communities.” Unlike many other viral testing platforms, MatMaCorp’s all-in-one Solas 8 testing device provides results for six samples in 120 minutes and doesn’t require the additional lab support often lacking in rural areas. To help make the pivot to the human health market, the company applied to the National Institutes of Health (NIH) Rapid Acceleration of Diagnostics (RADx®) initiative, a $1.5 billion program charged with identifying promising new COVID-19 testing technologies, validating their effectiveness, and speeding the best innovations to market. RADx Tech, one of the four RADx programs, is supported by VentureWell.

The decision proved fortuitous. Out of a pool of some 700 applicants, MatMaCorp made the cut through the program’s first phase, a “Shark Tank”-style process, and by June 2020 was gaining assistance from an expert biotech team of academics, researchers, industry consultants, and regulatory advisors. A short seven months later, in December 2020, the company’s Solas 8 device and 2SF COVID-19 test received emergency use authorization (EUA) from the Food and Drug Administration (FDA).

“The leaders behind the RADx initiative deserve a lot of credit,” says Kozera. “It’s really incredible how quickly this program came together. Being able to leverage expertise outside of our company really helped us accelerate the development of our product.”

a year of success

MatMaCorp’s experience with RADx is hardly unique. The program, which recently marked its first anniversary, has identified and helped commercialize dozens of leading-edge technologies, using its collaborative fast-track approach to achieve in months what once took years. Today, the RADx program is producing more than 2 million tests per day and innovations in the pipeline may soon allow even more rapid and less invasive testing.

The success of the program was recently applauded by the director of the NIH, Francis Collins, M.D., who called it “one of the most exciting things NIH is doing right now.” Discussing the program last year on his blog with RADx head Bruce Tromberg, M.D., who also directs the National Institute of Biomedical Imaging and Bioengineering (NIBIB) at the NIH, Collins highlighted the program’s strengths: “You’ve applied a venture capitalist strategy to RADx of trying to discover what’s out there, while not being afraid to invest in risky endeavors. You’re figuring out how to help promising technologies take their best shot and fail early, if they’re going to fail. And for technologies that are further along, you give them the needed resources to advance to commercialization. We have great hopes and expectations that RADx will make a real difference.”

For those involved in RADx, the program’s success offers a case study of what can be achieved when an entrepreneurial ecosystem is given the resources—and the coordination—to succeed. “What RADx showed,” says VentureWell’s Mark Marino, VP of Growth Strategy & Development and RADx Project Director, “is that when we have the best of government, academia, and the private sector working to solve a single problem, we can solve any number of issues. It could be climate change. It could be the next global disease outbreak.”

The key, Marino notes, is leveraging the strengths of each participant — government coordinates and provides the framework, resources, and regulatory assistance; academia plays its vital validation and technical role; and experts in the private sector help accelerate the work of de-risking the commercialization pathway and bringing innovations to the market.

VentureWell, meanwhile, serves as “the glue,” Marino explains, connecting the various players and solving problems. In particular, VentureWell provided support to the NIBIB-funded Point Of Care Technology Research Network (POCTRN) and the POCTRN Coordinating Center — The Consortia for Improving Medicine through Innovation & Technology (CIMIT) — that helped design and implement the RADx initiative. Whenever there was an obstacle to overcome in the RADx pipeline — such as identifying an expert on gold nanoparticles or finding a manufacturer that could supply nitrocellulose membrane — VentureWell was there to determine the best choice and coordinate. “We had a whole group of people and companies with expertise,” Marino says, “and our job was to figure out how to get them on board, contracted, and then track their performance over the year.”

MatMaCorp’s story is particularly instructive, says Marino, as the company’s journey demonstrates how collaboration was essential for its success in the COVID-19 testing arena. “Without the full infrastructure of what VentureWell provided — consultants, experts, service providers, companies, resources, lab space — MatMaCorp may not have reached its goal and now have its COVID-19 tests deployed in the U.S.,” he notes.

Kozera agrees. “As a small innovative company, we have limited resources internally, and RADx really opened up relationships that were not available to us before we entered the program,” he says. The consultants embedded in RADx gave the company support in several critical areas, he says: preparing the FDA’s application for EUA, scaling up production for commercialization, and implementing a quality management system. “If our core team didn’t have an answer,” Kozera explains, “RADx would connect us to somebody in their sphere of influence that would find an answer for us.”

To help MatMaCorp prepare the extensive documentation needed for FDA authorization, for example, RADx put the company in contact with Greenlight Guru, an Indiana-based firm whose proprietary software manages and tracks all the needed government forms for medical-device approvals, paperwork that can run into the hundreds of pages. Using Greenlight’s system, a company can “show all of its processes, how it operates, what it does to ensure consistency and safety, and all of its product development or manufacturing,” explains Greenlight’s Connor Remaley.

The system is so sophisticated, however, that it often takes a company as long as eight weeks to set it up — too long for a program all about accelerating timeframes. Greenlight’s solution was to bring in experts to get it done far more quickly, Remaley says. “We provided our partners — quality and regulatory consultants — to actually implement the system.”

Further, Greenlight helped MatMaCorp set up a new quality management system, Kozera notes, “to ensure that not only were we able to produce at a higher level, but that we were able to have that consistency in the product we’re manufacturing.” Other consultants worked with MatMaCorp on a process to scale-up manufacturing, partnerships that also were “extremely valuable,” Kozera adds.

a partner in the lab

To help validate the effectiveness of its new COVID-19 test, MatMaCorp was provided with laboratory assistance from the academic community, specifically from the Atlanta Center for Microsystems Engineered Point-of-Care Technologies (ACME-POCT), the NIH-supported team of researchers who “test the tests,” as the group’s lead, Wilbur Lam, M.D., puts it. “Our goal was to help the NIH determine which of the tests that they deemed meritorious really did work,” he explains. But if a test or device was not performing as expected for some reason, the researchers would work to find solutions. “We never like it when the devices don’t work,” Lam explains. “We want every device to work like gangbusters, so the NIH could then really scale up and devote even more resources to that specific technology.”

As it happened, that was the case with MatMaCorp’s testing device, which is designed to simultaneously evaluate multiple samples in separate wells. “We discovered that there could be an issue with contamination from one well to the other,” Lam recalls. “So we helped them troubleshoot on that.”

That solution-focused approach has been a key to the success of RADx. “There was an openness to changing and adapting because everybody was really focused on the one goal of getting more tests on the market,” observes Kozera. “FDA deserves a lot of credit for changing the process, adapting to the demands that we faced as a country.”

Lam says there was a similar flexibility in his institution, which is affiliated with Emory University and Georgia Tech. “Being an academic institution, it’s not easy to get 150 people to line up against one singular mission, let alone enable the institution to allow those 150 people to basically change jobs for a year,” he says. “But we were able to do that. And I think it was because of the special circumstances of this pandemic.”

Indeed, adds Marino, the enormity of the pandemic helped all the collaborators keep their priorities in perspective. “There was a lot of letting go by everyone, of egos, of anything political. It was often compared to the Manhattan project, with everyone having a role, and everyone working for the same common interests. It was quite remarkable.”

growing from the experience

As for MatMACorp, the experience with RADx has expanded the company’s sense of what it can achieve as a business, Kozera says. While it is still developing tests for animal viruses, including one for the costly swine virus that causes porcine reproductive and respiratory syndrome (PRRS), it is drawing on the lessons of RADx as it develops its newest device for the human health market, a hand-held polymerase chain reaction (PCR) amplification and real-time fluorescent detection technology called MYRTA (MY Real-Time Analyzer).

“Having gone through the experience with RADx really opened our eyes to the process of bringing a product to the human health market,” Kozera says. “It’s given us a really nice roadmap to follow to be able to bring this new product to market.”