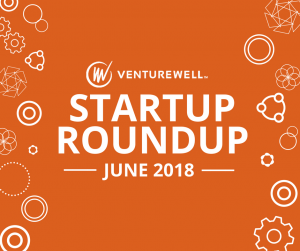 Want to find out what’s new with VentureWell early-stage innovator teams? Read the VentureWell Startup Roundup! Each month, we’ll share announcements, accomplishments, and other good news from teams in our community.

Sadeed Selected As Finalist For Womentum’s First Cohort
Sadeed, from the 2017 GIST Startup Boot Camp in Jordan, was selected as one of the top three female-led tech startups by Womena. The team was chosen from among 174 applicants for the first cycle of the Womentum Accelerator, kicking off this July.

Ground Fluor Licenses Groundbreaking Technology to Fluoropharma Medical Inc
Ground Fluor Pharmaceuticals, Inc. (GFP) issued an exclusive option to license of their technology to Fluoropharma Medical Inc. The 2011 I-Corps team developed a neuron imaging agent that may play an important role the diagnosis and assessment of various cancers, as well as some aspects of cardiovascular disease.

BioCellection Co-Founders Receive Echoing Green Fellowship Awards
Miranda (Yu Wen) Wang and Jeanny (Jia Yun) Yao of BioCellection, a 2016 E-Team, have been awarded Echoing Green’s 2018 fellowship for emerging leaders. The team, who is developing a new chemical recycling technology, will be provided with up to $90,000 in seed funding over two years, as well as training, programmatic support, and access to a large network of investors, supporters, and thought leaders.

LymphAxis & Nanochon selected as residents of new JLABS @ NYC facility
2013 E-Team, LymphAxis, and 2016 I-Corps Team, Nanochon, were among the first 26 teams to be selected as residents of JLABS @ NYC, a life science incubator sponsored by Johnson & Johnson Innovation, New York State, and the New York Genome Center. The center can accommodate up to 30 biotech, pharmaceutical, medical device, consumer and health tech companies.