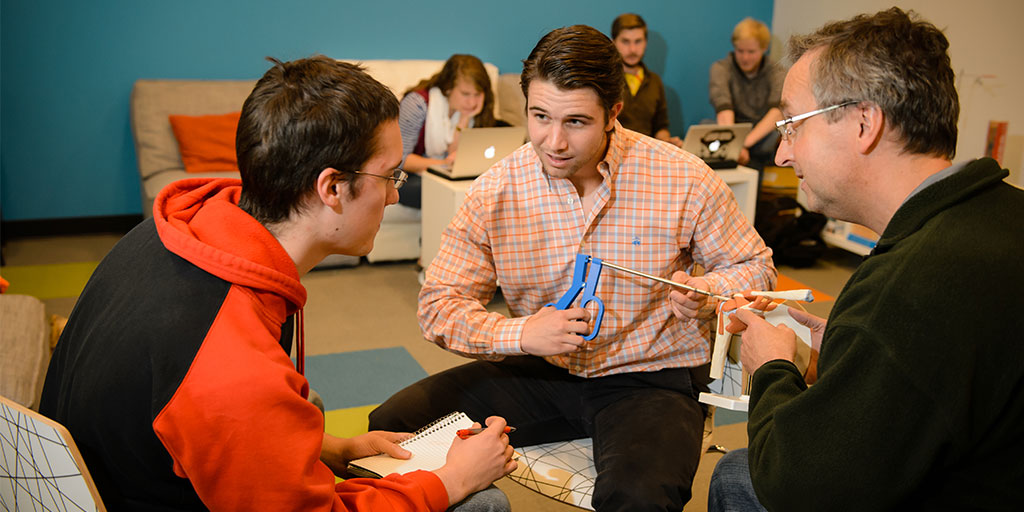 It is now standard for engineering programs to culminate in a capstone course. Capstones create an innovative model for engaging students – helping them apply the skills they’ve learned during their academic careers in a hands-on environment, preparing them for real-world challenges, making them more competitive for the job market, and teaching them valuable entrepreneurial skills to launch a venture.  And since creating technology solutions to big healthcare problems is what biomedical engineers do, it’s no surprise that bioengineering capstone programs have been widely adopted at leading universities around the world.

Here are some of their insights, based on years of experience running successful bioengineering capstone programs.

In leading bioengineering capstone programs, students don’t just simulate a few aspects of designing and engineering biomedical devices.  In most important aspects – regulatory compliance, design, testing, and more – they may as well be developing a real device for the marketplace.  “For our students, this doesn’t feel like a simulation – it feels like the real thing,” says Desjardins. “That’s exactly what we want.”

The more students engage with real-life aspects of developing a biomedical device, the better – starting with problem identification, which is widely considered to be the single most important part of the course.  Shih says, “Our students are required to go out and find clinical problems that need to be solved, which is usually the most difficult part of the program. They have to talk to clinicians, biomedical faculty, or others in a position to know about current clinical challenges in order to identify a real problem.”

There may be no better way to help students understand the real-world challenges of biomedical engineering than to require them to jump through all the regulatory compliance hoops that their real-world counterparts encounter every day. “I believe that as biomedical engineers, our understanding of regulatory issues is really the only thing that distinguishes us from other engineers,” says Desjardins. “If you can distinguish yourself through a deep understanding of the regulatory process, then you bring a lot of value to any biomedical device company.”

Know when to say “no”

For students, a bioengineering capstone course is typically unlike any class in which they’ve participated – so it should come as no surprise that they enter the course with a host of largely predictable misconceptions.  Leaders of successful programs have learned that it’s important to draw clear boundaries from the start.

To use a simple example, these programs aren’t merely about designing a device – they’re about making one. That’s a useful distinction given the rising interest from students in developing software applications, or in merely pursuing a research project.  While these types of projects have their place in bioengineering, they’re considered to be outside of the scope of capstone courses. Addressing these issues head-on at the outset of the course helps students stay focused.

There’s also the perennial issue of student teams that bite off more than they can chew. “Students often want to take on big, ambitious challenges,” says Park. “We want them to be ambitious, but part of being a successful bioengineering team is taking on realistic challenges. If a team comes to us with an idea that’s either overly ambitious or unrealistic, we lay out the specific challenges and they’ll often get to ‘no’ themselves.”

Build in time for iteration

For Dr. Park, there is a clear link between a team’s ability to iterate and improve on their project, and the overall success of the project. “Time after time, the teams that have entered and won bioengineering competitions are the ones that went through multiple iterations of their project,” he says. “Meaningful cycles of refinement simply fare much better in competition, and overall.”

Students in bioengineering capstone programs may need to be encouraged to iterate. That requires understanding the big role that iteration can play in successful projects.  It also requires planning – student teams should be building iteration time into their formal project schedules. Some teams may feel that if they overhaul or even discard their projects in favor of starting anew, they’ll have sacrificed precious time and resources – putting them at risk of jeopardizing the project overall.  Explicitly encouraging iteration on these projects may be required.

Just how many iteration cycles are acceptable? While there is no exact number, Park says that teams in the UC-Riverside program routinely go through three iterations on their projects – “and that’s a good thing!”

Bioengineering capstone programs engage a host of different types of hard and soft skills.  All are important for students’ success, not only in the context of the project, but in terms of their learning and career preparation. But some are more important than others, says Desjardins.  “For a lot of students, this is the first thing they’ve ever made. I tell them ‘look, you may not be the best person to make this device, and that’s okay. It’s more important for you to be able to identify an important, solvable problem, and design a device that addresses that problem. Your assembly and fabrication skills aren’t as important. In the end, we don’t really care whether you’re great at using a band saw.’”

While the value of hard engineering skills is clear in bioengineering capstone programs, don’t overlook the importance of soft skills.  Communication skills, for example, play a huge role in successful projects. Teams should learn how to talk to one another, effectively disagree with one another, resolve conflicts, present as a team, run meetings, and much more.  Some programs spend time in the course focusing specifically on such soft skills, alongside problem identification and project design.

In the real world, biomedical projects are subject to regulatory oversight at every turn – after all, it’s not just the final product that is subject to review, but all the processes that were undertaken to arrive at the finished product.  These initiatives are highly structured by design, because they have to be – and projects follow suit. That allows for a level of standardization that capstone courses in other engineering fields may not enjoy – and it means that the leaders of these programs can draw from a number of standard resources as they structure their courses, from widely available FDA regulatory guidelines and instructions and much more.

Leaders of bioengineering capstone programs at UC-Riverside, Drexel University, and Clemson University all indicated that they borrow biomedical engineering guidelines from the DEBUT Challenge as a tool for streamlining the course workload in a manner consistent with widely embraced industry standards.  At Drexel, Shih says “we require student teams to submit their final report in DEBUT’s format, and we encourage them to participate in the DEBUT competition.” For Desjardins, “DEBUT is a helpful tool for instituting current best practices in biomedical engineering. It checks a lot of really important boxes, and gives us a broader view of what a good design course looks like.”

Whether you’re just embarking on a bioengineering capstone course at your university, or you’re running an established program with a history of success, there’s always room for improvement – especially given the constantly changing nature of the biomedical device industry.  One trait that all the programs mentioned in this article share is a commitment to constant improvement.

A commitment to continuous improvement serves students well, regardless of their ultimate career paths – because bioengineering capstone programs can have a huge impact on students, from cultivating problem solving skills to preparing for careers. “We have alumni who come back to our program and say ‘this was the most valuable and enjoyable course I ever took – it’s had a huge impact on my career,” says UC-Riverside’s Park. “We want to make sure we keep delivering that experience for students by constantly improving and evolving as the field itself changes.”

There are several opportunities for BME students tackling big problems in healthcare through innovation. The BMEidea competition, open to any biomedical or bioengineering student teams, offers prizes of up to $10k. For undergraduate students, NIBIB and VentureWell support the DEBUT Challenge specifically for undergraduate BME students who are solving real-world problems in healthcare.