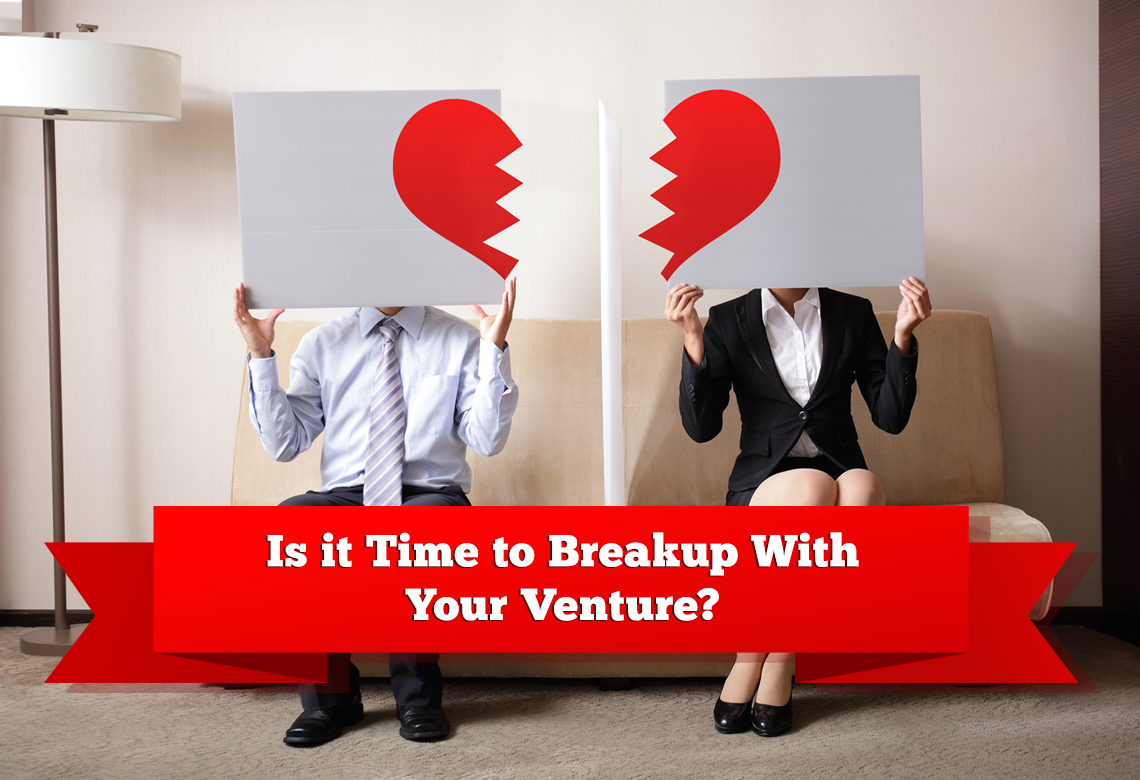 You’re swooning over your venture idea. You’re head over heels for your invention. You spend so much time with your business partners that you’re practically married. But, not everyone is as enraptured as you, and you’re beginning to hit some snags—no real problem for your innovation to solve, no market for your product, no cohesive vision with your partner. All entrepreneurs face crucial moments when they have to decipher setbacks from serious flaws, drawing from both their passion and realism to push their project forward, pivot to something new, or pull the plug altogether. At what point do you ask the painful question: Is it time to breakup?

This Valentine’s Day, we asked three program officers at VentureWell for relationship advice—only not for your sweetheart, but for your invention, idea, business partner, or venture. We spoke with:

Janine Elliott, curriculum designer and primary instructor for the E-Team grant and training program. She was a co-founder of a cleantech materials startup.
Tara Loomis, senior program officer for the I-Corps™ program. She manages the national courses, including faculty development and curriculum improvements, and leads new I-Corps™ initiatives.
Cara Barnes, program officer for the Xcelerator training program, which supports early-stage global health innovators. She was a scientist at a startup, Diagnostics For All.

All three help mentor and train early-stage innovators, and they can identify the warning signs of a troubled venture. They offer insight into minimizing the damage to yourself and to your investors. And, drawing from personal experience from failed startups, they tell entrepreneurs how they can pick themselves up and try again.

Why is it important for entrepreneurs to balance passion and realism?

Elliott: Entrepreneurship is an emotional roller coaster. Passion and realism—whether you’re at the top of the highest highs or the bottom of the lowest lows—are both actually really important. The passion can demonstrate your confidence and get you through those hard times. The realism helps you weigh the situation objectively: “Is this just a rough patch? Or is this downturn actually a really important data point for me to be looking at regardless of how passionate I am?”

Barnes: Some innovators are highly passionate, but lack realism. Unbridled passion doesn’t have a lot of focus or direction for how to move forward with an innovation, coming to the understanding of what it really takes, being more realistic about what milestones to hit, and how to channel it into a direction that is productive is crucial.

Loomis: You have to have the passion because it is a lot of hard work. You have to be in it for the long haul, and you have to be realistic about the very real possibility of failure.

What are the warning signs that an innovation or idea is not working?

Loomis: Sometimes entrepreneurs think there’s a problem that they are solving, but when they go through the discovery process and try to find customers, they realize the problem really isn’t that big, or they’re not really solving a problem. It’s important to have an understanding of the market, the market size, and whether it’s viable. If you’re not clear about those areas, that’s a pretty obvious warning sign.

Elliott: It’s a red flag for me when I hear an entrepreneur repeatedly say other people don’t understand the value of their product. They either just haven’t found that correct market yet, or even worse, they don’t have the curiosity or the flexibility to actually listen to what that market needs.

Barnes: An idea doesn’t always equal demand. Sometimes there’s not an ability or willingness to pay for the solution that an entrepreneur is providing. If that customer discovery isn’t there, if there’s not willingness and ability to pay, even if the need is huge, that’s a red flag that they’re not going to be successful.

When should innovators breakup with their idea or innovation?

Elliott: If they’re not getting that warm reception from customers. If they’ve gone out and talked to ten or twenty people and they’re not hearing anything that remotely resembles a pattern in terms of problems they could be solving, they’re not heading in the right direction, period.

Barnes: As the entrepreneur, are you in love with the problem that you’re solving or the solution that you’re providing? In the process of customer discovery, you’re seeking to understand the root causes of the problem that your solution is supposed to be solving. Often times, it turns out that the technology you’re developing isn’t the solution to the root cause of the problem. That’s when you should ask yourself, “Does it matter what that solution is as long as you’re able to solve that problem?”

Loomis: If you don’t have a product-market fit, or a problem-solution fit, then you move on. It doesn’t mean you move on from the problem. If you’re still passionate about that, you pivot and you go down a different road.

When should you breakup with your business partner?

Elliott: If their business partner has a fundamentally different vision, there will be no reconciling of that. Pretty much ever. It’s just two completely different ways of being in the world.

When should you breakup with your venture?

Barnes: Pulling the plug when you’re bleeding money is a better scenario than having your investors or your funders pull the plug for you. I think being able to reach that decision for yourself, seeing those warning signs, having enough realism to say this isn’t working, and saying, “We need to step away from this before other people decide it’s over for us. That hurts much worse.”

Elliott: I know that for me, it was when one of my co-founders had a very radically different vision. Another co-founder had just had a kid, and I was going into credit card debt for the first time in my life. I realized, “Wow, I need to not do this anymore.” There’s a healthy keeping you up at night, and then there’s a really unhealthy keeping you up at night. That’s different for everyone, of course, but it’s important to listen to those signals. Don’t ignore them.

How should innovators cope with a breakup (from an idea, business plan, etc.)?

Elliott: I had a long, drawn-out, ugly breakup with my startup. It really does sort of shake up these questions about identity. If the business fails, am I a failure? If my business fell apart, does that mean that somehow I’m broken? I think the thing that eventually was really cathartic and healing for me was actually working with other innovators and being able to use my failures as lessons to others. Reconnecting with my passions and friends also helped.

Loomis: Honing in on that failure as a teachable moment and saying, “What could I have done differently? What did I do right? What did I do really wrong? What was in my control?”

Barnes: It’s inherently emotional. You pour your blood, sweat, and tears, your heart and soul into it. When it fails, for whatever reason, there’s a grieving process. As with the loss of anything, there are teachable moments.

When should innovators dive back into the pond again?

Loomis: When they’ve gone through the process of understanding what went wrong and owning it. And being able to recognize when it could happen again – and be willing to get hurt again. I’m going to put this back in the analogy of a relationship. You can’t go in halfway. You have to be all in. You can’t jump back in with hesitation.

Barnes: It might feel like the end of the world, but it’s not. Knowing that allows you to be open to trying – and even possibly failing – again.

Elliott: Try again. It’s fine to grieve, but keep your head up, stay a part of the community, and stay connected to your support network.

All three program officers agreed that entrepreneurship is dating, and finding that special someone—i.e. your invention or idea—rarely happens on the first go round. You might toy with dozens of ideas or innovations before you find the right one, and then you’ll need to get to know your business partners, hash out the details in a business plan (a little like a prenup), and woo your investors—all while you keep your passion burning for your original vision. Still sound romantic?

After the honeymoon phase, you’ll hit some road bumps, and a discerning eye will help you make critical adjustments—which sometimes means major changes, like abandoning a well-funded idea that has no viable market, or cutting ties with a longtime business partner when paths and visions diverge. And sometimes, it means breaking up altogether and starting from scratch. Bring on the pajamas, the pints of ice cream, and the self pity. Then, remember that there are more fish in the sea, and the world is waiting for you to try again.