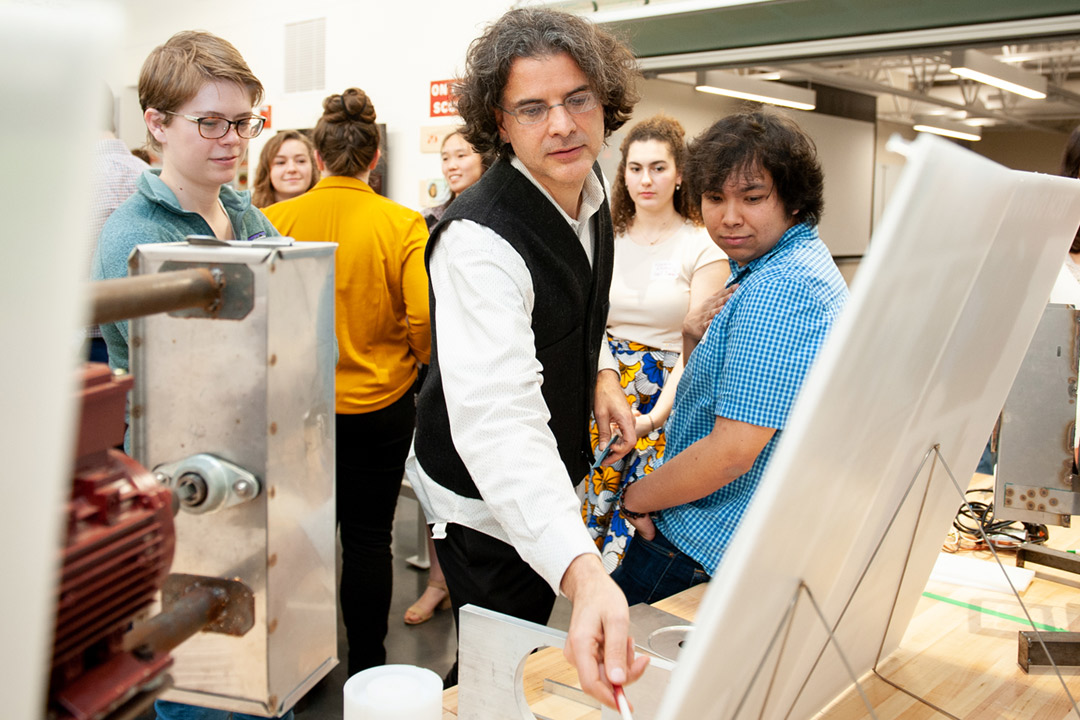 Back in 2010, Benjamin Linder had an idea for a program that would allow Olin College students to take on social and environmental challenges endemic to contexts of poverty and injustice. After pitching the idea to the College—founded just 13 years before in Needham, Massachusetts—he received an enthusiastic response rare for many education innovators. “We love the idea,” Linder recalls the administration saying. “You are welcome to go for it, and you’ll need to find funding.”

Linder, an associate professor of design and mechanical engineering, partnered with Erik Noyes, an assistant professor of entrepreneurship at neighboring Babson College, to cofound the program and applied to VentureWell for a $30,000 faculty grant to help launch the project across both campuses. Ten years later, the capstone course and program known as Affordable Design and Entrepreneurship (ADE) is going strong: some 500 engineering, business, and liberal arts students have collaborated with communities and developed social ventures in the US and abroad, with many students continuing work on their projects beyond the course including after graduation.

“Throughout a decade of ADE, Babson, Olin, and Wellesley students have had a positive impact with a wide range of partners in multiple communities around the world,” notes the program’s website. “Projects focus on challenges including air quality, community development, child education, food processing, global health, and rights and privacy.” Students have worked with youth, educators, and community leaders to create afterschool programming in Clarksdale, Mississippi; rickshaw pullers to improve pedal rickshaws in India; and women who make gari from cassava to develop a small-scale grater in Ghana.

An Emphasis on Collaboration

The ADE program, which in 2018 moved to Babson’s Weissman Foundry, a brand-new design studio and makerspace between the Olin and Babson campuses, is unusual among experiential entrepreneurship initiatives in that it employs what the program calls a “founderless” social venturing model. Rather than being headed by student founders or principal investigators, the ventures emphasize collaboration, both among teammates (students come from Olin, Babson, and Wellesley College) and with stakeholders in communities with high unmet needs.

“We’re incubating ventures that ultimately are not run by our students,” Linder explains. “It’s not right to invite young people as outsiders to contexts of injustice to run social ventures. We need to be investing in local capacity-building of people where challenges are faced.”

While the founderless model can limit individual ownership pathways for students, it can also be powerfully transformative, Linder notes, by giving students a chance to better understand and work directly with and on behalf of people confronting injustice, becoming what the program calls “active citizens of the world.”

“Many students have told us they changed their life plans as a result of going through the program,” Linder says. “Engineering can be abstract, and in ADE they come face-to-face with people in need, and as a consequence what they’re doing and why becomes concrete and real.”

Along with creating new possibilities for students, ADE has helped raise broader questions on campus such as, What is education for?, says Linder. “A meaningful part of the answer has to be civic engagement,” he contends. “It has to be about participatory as well as professional readiness as Danielle Allen has advocated, playing a positive role in civil society. And we’re doing a piece of that work with our students.”

“There’s been a significant impact on the institution,” says Linder. “We demonstrated a way for students to work on what we call ‘for the good of the world’ in our mission — context, ethics, responsibility, and sustainability. As a faculty, we recognized this is what the school should be doing.” The program’s values and priorities attracted new students and professors to Olin, elevated the visibility of social entrepreneurship on campus, and helped shape the College’s view of its mission in society.

The Importance of Early Backing

The VentureWell faculty grant proved catalytic in this transformation, Linder says, by both providing financial support and serving as a vote of confidence in the idea of ADE. According to a recent VentureWell assessment of the faculty grant program, fostering positive change within higher-education institutions “is an explicit focus” of the program. Indeed, most grant recipients—109 of 148 surveyed—reported that the award had a medium or high impact on their academic institution, and more than half described that impact on their institution as the biggest consequence of the grant. Among the specific institutional changes cited by recipients: sustained new courses and programs, improved collaboration, greater support for innovation and entrepreneurship, and increased credibility leading to additional funding.

“What can’t be overstated is the value of funding early on,” Linder says, adding that it was particularly vital at a new college like Olin, which didn’t have the resources of a full development office initially. “It’s money, plus a vote of confidence to say, ‘We think you’ve got something here, we want to invest in you and give you a shot at trying this.’ Of course, the two go together because there’s nothing like external funding to build support internally.” Early funding creates long-term possibilities to institutionalize programs and create systemic change. Today, ADE’s staffing costs are entirely covered by the college partnership.

VentureWell Course & Program Grants of up to $30,000 are awarded to faculty or staff at US higher education institutions to support curriculum that engages students in science and technology innovation and entrepreneurship. Learn more and apply here.