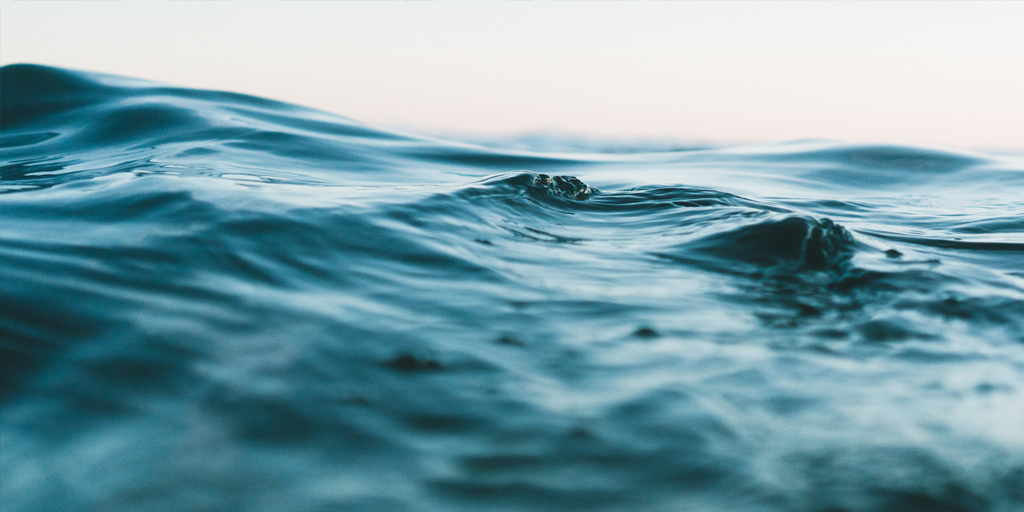 “If a sustainable future is to be created, continuing along a ‘business as usual’ pathway is no longer an option, and water management needs to be scrutinized through a climate-resilience lens.” That unequivocal statement is from the United Nation’s 2019 policy brief on climate change and water, but it could easily have been drawn from the business plans of a new generation of ventures that are rethinking how society uses, manages, and protects water in the age of climate change.

The UN is spotlighting the relationship between climate change and water by making it the theme of World Water Day 2020, held each year on March 22 to focus attention on the issues threatening this vital global resource. Climate change and water are “inextricably linked,” the UN points out: Climate change impacts the planet’s water cycle, leading to weather extremes that threaten already-taxed water supplies. And demand for new water supplies, in turn, encourages practices that can exacerbate global warming.

The VentureWell E-Teams profiled here are heeding the UN’s advice, rejecting “business as usual” as they find ways to disinfect drinking water in under-resourced communities, use water as an energy-efficient cooling agent for the world’s data servers, and develop a non-polluting marine engine.

let the sunshine in

Even as climate change threatens the availability of safe drinking-water supplies, global health experts estimate that half the world’s hospital beds are filled with patients suffering from diseases caused by contaminated water. The Billion Bottle Project, a nonprofit enterprise launched four years ago by a team of Case Western Reserve University medical students, wants to change that. Their tools of choice? An ordinary plastic bottle and a sunny day. 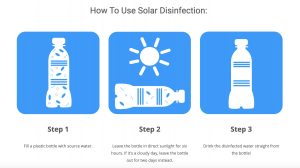 Turns out, you can kill harmful waterborne bacteria, viruses, and parasites simply by putting water in a clear container and setting it in the sun, a process called solar disinfection, or SODIS. The technique has been around for decades, explains the Billion Bottle Project’s marketing director Sam Stanley, “but it never really caught on because it’s kind of tricky to use.” Specifically, it’s hard to know if enough ultraviolet rays have penetrated the water to kill the pathogens. Factors like passing clouds, turbid water, or a scratched bottle can all effect UV penetration rates. The Billion Bottle Project’s answer is the OSPRI, a sensor that removes the guesswork: place the small gel-filled tube in a bottle and when it turns from blue to white, the water is safe to drink. Remove the sensor, let it air overnight, and it turns blue again, allowing it to be reused for up to a year. Best of all, for the 1.8 billion people worldwide dependent on contaminated drinking water, the sensors cost less than a dollar each.

The response from advocates working in the water, sanitation, and hydration field and from those who work with low-income communities “has been astonishingly positive,” reports Stanley, who like all the members of the Billion Bottle team is a volunteer. “They think it has both a lot of potential and a lot of applications.” The venture has received funding from private donors, grants from the Environmental Protection Agency, and pitch competitions, including a £50,000 WorldLabs Elevating Ideas award in 2018.

After talking with potential backers such as the Bill and Melinda Gates Foundation and Doctors Without Borders, the group is gearing up to produce a thousand OSPRI sensors for field testing in Africa or India this summer. “It’s all about building stable relationships with those communities who actually use the solar disinfection technique,” Stanley explains. “From there, we can prove to people that what we have works.”

a greener way to cool computers

Our information-age society relies on data centers, vast warehouses of high-powered computers that make the internet possible, but also draw some 2 percent of all the electricity used in United States. As much as 40 percent of that energy goes to powering the air conditioning and fans needed to cool the machines, but despite that significant carbon footprint, heat remains a key limiting factor for computational speed. Engineers have explored other cooling methods, such as immersing the machines in non-conductive dielectric fluids, but those chemicals come with a host of environmental issues.

The founders of AquaQuant Laboratories say they have a more sustainable and more cost-effective cooling medium: water. The key is first applying a proprietary coating the team developed that effectively water-proofs the circuitry. “The promise of this coating is that it does not conduct electricity at all,” explains Peter Sokalski, who co-founded AquaQuant with electrical engineer Thomas Foulkes in 2017 when both were students at University of Illinois at Urbana-Champaign. “But it still conducts heat very well. That’s the unique part of this coating: heat flows but electricity does not.”

Indeed, AquaQuant’s nanostructured material conducts heat so well that it can cool a device anywhere from 2 to 4½ times more efficiently than using air, Sokalski says, for “an astronomical” energy savings. But equally important, he notes, is that improving the cooling process increases how much work a computer can do. “That’s the main selling point for us,” he explains. “We’re not just saving you energy. We’re telling you that for the same amount of energy you’re putting in, you can more than double the computational speed that you had before.”

For the Googles, Amazons, and other computation-dependent companies of the world, that’s a message with increasing appeal, though Sokalski notes that breaking into the high-tech marketplace with its established players is “the biggest challenge that we are seeing in the upcoming years.” At present, he says, AquaQuant’s innovation has been experimentally validated, and they are moving into a prototype phase.

Ultimately, AquaQuant wants to present itself as a green alternative, offering large tech facilities not only carbon savings and greater computing capacity, but possibly a new option for producing heated water or recycling graywater. “We are really pushing big into recyclability,” says Sokalski, now studying materials science at the University of Texas at Austin. “We’re looking at cradle-to-cradle product design, not just with our products, but with the water that comes with them.”

One argument for why the world needs a better electric outboard motor, say the founders of Flux Marine, can be seen in what the nation’s conventional recreational outboards leave in their wake: an estimated 150 million gallons of unburned gasoline (15 times the estimated amount of the Exxon Valdez oil spill) and clouds of air pollution, as much in an hour as driving a car for 800 miles. In marked contrast, Flux Marine’s design—a 15-horsepower prototype of which will debut this March on a Brown University sailing team boat designed by the East Bay Sailing Foundation—emits no pollution, requires no scheduled maintenance for 10 years, accelerates faster, and is virtually silent.

True, that model’s current starting price of $10,000 is considerably more than the $4,000 or so of a conventional outboard, but Flux Marine CFO Daylin Frantin says that a typical boater should make up that difference in about five years, thanks to the savings on fuel and maintenance. And while other companies also produce electric outboards, usually intended for trolling, Flux Marine believes its design innovations—in particular its motor’s sealed cooling system and improved architecture—give it an edge over the competition. 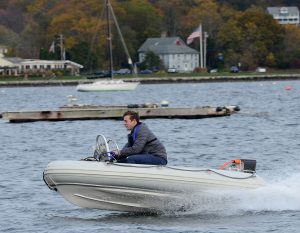 “A lot of them have just taken the structure of the gas outboard and converted the power head to electric,” explains Frantin, who launched Flux Marine with engineers Benjamin Sorkin and Jonathan Lord in 2018. “Designing our own structure leads to efficiencies that all add up to a system that’s more efficient and happier running on a boat than what everyone else has been able to offer.”

Despite those arguments, the team recognizes there is an educational challenge in winning over the owners of the country’s 13 million registered boats, who may have concerns about relying on batteries at sea and keeping them charged. Frantin counters that recreational boating, unlike driving a car, is a planned activity. Once the batteries are charged (with a standard plug), “our system can do two or three times the average range of a typical boating day, about 35 miles. As long as it’s charging on the dock, you’re leaving with a full tank.” Boats kept on moorings can keep their batteries charged with solar panels, he adds, an accessory the team has been exploring.

It remains to be seen whether Flux Marine can become the boating industry’s Tesla (where CEO Sorkin previously worked as a battery engineer.) Having received some $300,000 in grants, the team hopes to scale up with larger motors and is now in talks with investors for an equity round. As with automobiles, what may prove to be a key selling point is the environmental cost of the current technology. “People don’t know how bad it truly is,” says Frantin. “Most boaters that we speak to, they’re kind of astonished when we drop some of those facts.”

For Flux Marine, as with AquaQuant and the Billion Bottle Project, abandoning the “business as usual” pathway has proven to be a key to innovation. For the health of the world’s water systems and climate, that’s an approach needed on World Water Day—and every day.

Visit our Environmentally Responsible Engineering page for tools and resources on integrating principles of sustainability into your work.