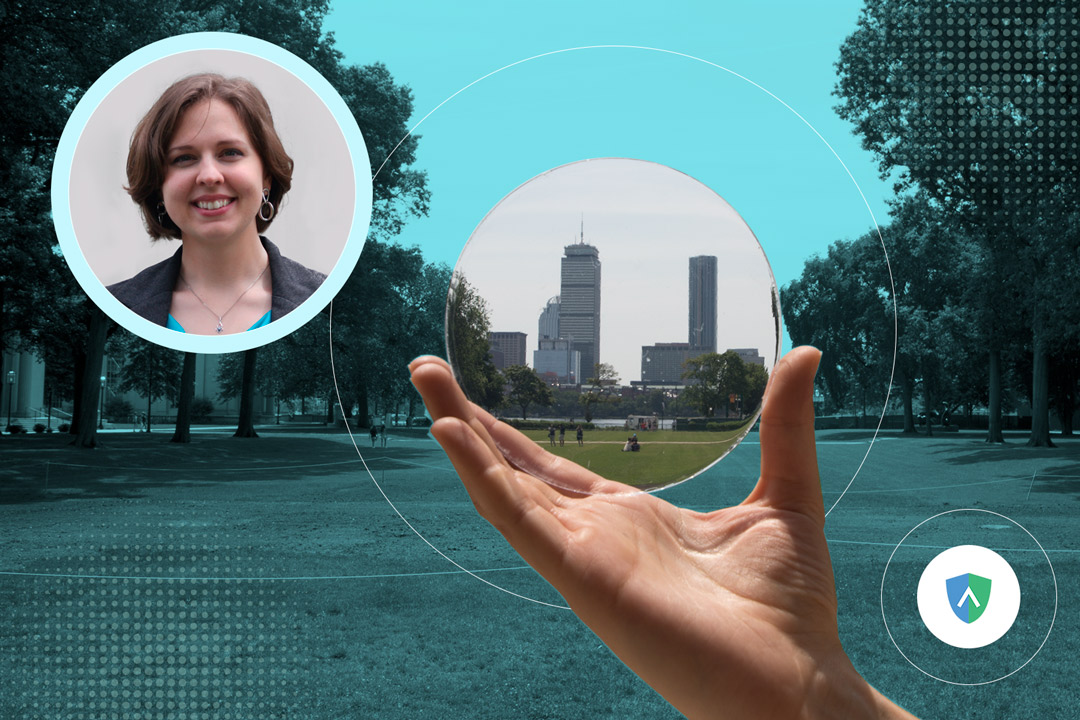 This article has been updated with additional resources. The original article was first published as part of our 25-year anniversary celebration.

At first glance, the material developed by E-Team grantee Elise Strobach looks like ordinary window glass. But lay a pane of it on a table and it all but disappears, thanks to its lack of reflectiveness. Pick it up, and it’s lighter than a marshmallow. That’s because this glass is actually an aerogel, synthesized by Strobach and her team at AeroShield by first infusing silica gel with a vast network of microscopic bubbles, called nanopores, and then using a pressure chamber to extract the fluid from the nanopores. What’s left is a patent-pending material that’s 95 percent air, a glass Styrofoam that lets in light but keeps in heat.

Strobach and her co-founders won the American-Made Solar Prize Round 4 in 2021 for their work, which Strobach credits for helping her team realize their potential. “We actually found a way to engineer this nanostructure to allow it to be super clear, so now you have something that lets solar energy in and is super-insulating, so it keeps all that heat stored where we want it,” she said.

We spoke with Strobach about how early-stage support helped support the success of their research team.

Glass aerogels have been around since the 1930s, but until Strobach developed her formulation as an engineering graduate student at MIT in 2016, the materials typically were a foggy blue, more translucent than transparent. Strobach and her colleagues in the Device Research Laboratory originally sought to use aerogels to improve the efficiency of utility-scale solar energy collectors under a Department of Energy grant. But while clear aerogel makes an excellent insulator to harvest the sun’s thermal energy, Strobach and co-founder Kyle Wilke soon realized that their material could have an even larger energy impact in other applications.

To help identify other customers and develop a business plan, they participated in our early-stage training program and the National Science Foundation I-CorpsTM, all of which helped shift their thinking from research to entrepreneurship.

“As researchers, it’s so easy to say that the technology is the most important or the first thing that has to happen with a startup,” notes Strobach, who co-founded AeroShield with Wilke in 2019. “VentureWell encouraged us to think about the customer and the value that we’re providing.”

Innovating for energy efficiency and the planet

Given their aerogel’s insulating ability, the partners zeroed in on residential windows, whose inefficiencies account for up to 30 percent of a home’s heating and cooling costs. To improve that performance, window manufacturers currently rely on panes of glass separated by a gas, usually argon. AeroShield’s material, it turns out, is two to three times more insulating than argon, allowing manufacturers to build double-pane windows that have the thermal performance of expensive triple pane designs (R-6 or higher), but at a fraction of the cost. That’s good news for homeowners looking to save on heating and cooling bills—and for our warming planet. “At the end of the day,” says Strobach, “there’s huge potential, billions of dollars in energy savings and significant carbon reduction.”

That environmental impact is key for Strobach, who says she began to realize as an engineering undergrad that “the true energy problem, particularly in the U.S. with greenhouse gas emissions, is not just where we’re getting our energy from, but also how we’re using it.” A point in favor of supporting the efforts of early-stage innovators. “I got the bug for energy efficiency—in particular, building efficiency—and had an appreciation for how much impact that field really could have,” Strobach continued.

The game-changing potential of AeroShield’s material and the size of the residential window market has helped the company win innovation prizes and gain backing from a number of green energy investors, including the Massachusetts Clean Energy Center, as well as VentureWell. A recent investment round allowed the team to buy a pressurized drying vessel that can produce small panes of aerogel glass for testing, and they were also awarded $13,830 through the Manufacturing Emergency Response Team (MERT) 2.0 Prototyping Grant Program. Working out of Greentown Labs in Somerville, Massachusetts, and Gel Laboratories in Hyde Park, Massachusetts, the company is growing, with several new positions added this year.

As the team’s innovation moves from the lab to the market, Strobach and her team are now working with their partners to determine how best to integrate their remarkable material into windows. “We want to establish this strong market entry,” she says, “and show that aerogel in windows can be not only a thermally superior material, but that it can be manufactured in a cost-effective way and meet the manufacturing challenges of the window industry.”

As referenced in our report The Multidimensional Impact of Entrepreneurial Support Programs, early-stage support was a key component to putting the team on track for success. “Not knowing what we didn’t know was such a battle in the beginning,” she recalls. “VentureWell held a mirror up to what we were building, and not only showed us where the gaps were, but also gave us the tools to start addressing them, with support throughout the whole process.”

Looking to the future

AeroShield is going strong. The team was recently featured at the 2022 MIT Startup Showcase Silicon Valley conference, a one-day event that brought together thought leaders and innovators in the sustainability space. They also announced their partnership with the University of Michigan on a grant to develop high-temperature solar thermal receivers, with a target of reaching up to 700°C. We will continue to follow their development as they reach new and more exciting milestones.

The American-Made Solar Prize is designed to energize U.S. solar innovation to meet our clean energy goals and is open to anyone with bright ideas. Round 6 is open to both hardware and software technologies and offers additional prizes for solutions that address barriers to solar adoption in underserved communities. Watch an informational webinar.