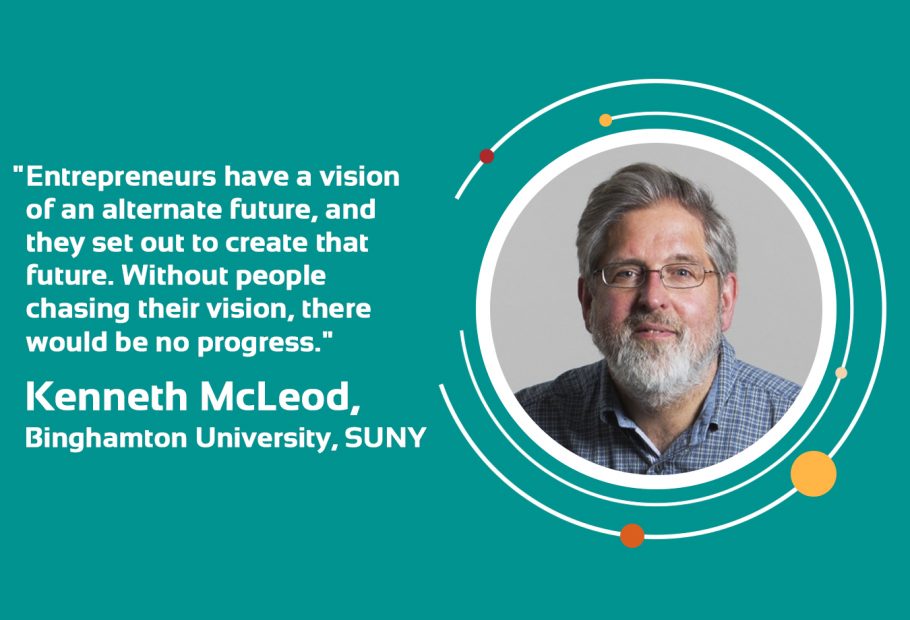 We continue our series highlighting educators within the VentureWell network who are doing good work—faculty members who are catalyzing change in higher education and inspiring students to impact the world through invention. This month’s faculty spotlight is Kenneth McLeod, Professor of Systems Science and Industrial Engineering at Binghamton University, SUNY. McLeod is an active member of the VentureWell community. He received a Faculty Grant for a first-year course sequence focused on helping women undergraduate students develop an entrepreneurial mindset. The goal of the program is to increase the number of women involved in entrepreneurial activities on campus, leading to stronger interest among women in launching a venture upon graduation.

I became involved in a startup company while I was a graduate student. Despite the company dissolving due to bankruptcy, I became intrigued by the whole startup process. Subsequently, I have been involved in the founding of more than a dozen new ventures, and in so doing, have made just about all the mistakes one could possibly make. It seemed only appropriate to help young people avoid many of these mistakes by providing them with an introduction to entrepreneurship while they were still students.

what is your favorite thing about teaching?

Without question it is the opportunity to influence the future. Nothing is more enjoyable than getting an email from a student who graduated years ago explaining how you were instrumental in changing their life.

where would you like to see the field of entrepreneurship in five years?

It is very difficult for young people to launch new ventures in the current economy. More than two-thirds of commercial banks, primarily the regional banks that would traditionally fund small local ventures, have disappeared. As a result, only a small subset of young people, primarily those who can arrange a “soft-landing” prior to launching, take up the challenge. It doesn’t matter how well young people understand the entrepreneurial process if it is out of reach. As a country we need to work much harder, over the next five years, on developing the infrastructure to support the creative ideas of young people who have no other collateral than their ideas, and willingness to work hard to bring those ideas into fruition.

what are the challenges you’re tackling in your work today?

A large percentage of the counties in the U.S. are shrinking, both in terms of population and economic output. Many young people do not want to live in these regions. Meanwhile, housing costs are spiraling out of control in many major cities where there are abundant jobs, making it difficult for young people to live in those cities. We need to find a way to physically link these regions so that we can maximize the assets and benefits of both types of regions.

To that end, I am currently involved in the development of a high speed (200-300 mph) ground transportation system that will conveniently, and inexpensively, interconnect rural regions and link them to their economic hubs. This will allow people to live and play in relatively low-cost, open areas of the country, and yet have a short commute into the economic hub of their region.

what books on entrepreneurship and innovation have you been reading lately.

I am currently reading Robert Shiller’s Narrative Economics. An important theme in entrepreneurship is how well you can “sell” your ideas. The most effective way to sell is through stories, specifically, by creating “viral narratives” — the focus of Shiller’s book.

what is your most useful classroom activity or assignment?

I have each student in my freshman entrepreneurship course take on a semester-long “side project.” This is supposed to be something they have always wanted to do, but have never started. Working on projects that you are enthusiastic about is a very important lesson for young people because it is the essence of entrepreneurship. Entrepreneurs have a vision of an alternate future, and they set out to create that future. Without people chasing their vision, there would be no progress.