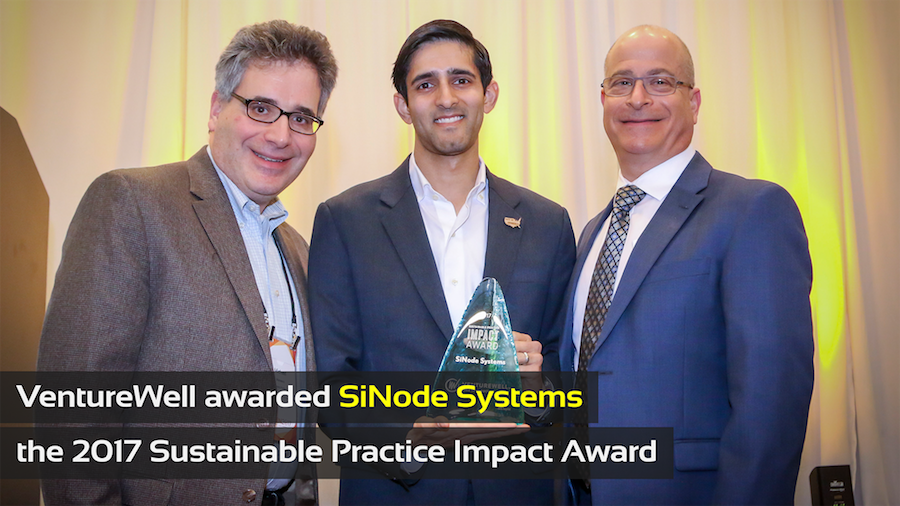 However, current battery chemistries have hit a plateau in performance improvements. They’re unable to meet consumer demand for range, power, and cycling stability. Lithium-ion batteries are also resource-intensive to produce, which can lead to greater environmental issues as demand increases.

Powering Through the Early Stage of Development

While in the lab at Northwestern University, the team set out to create a company that produced longer-lasting, faster-charging batteries. “We had grand plans to start our own battery company,” Mayekar says. After honing their business plan and customer discovery skills during VentureWell’s E-Team Program, they realized there was a stronger business opportunity to sell materials to existing battery companies. Yet they had to overcome a critical obstacle in the beginning: how to incorporate their material into the battery production process.

The engineering team worked with researchers at Northwestern University to create a technology using a composite of silicon and graphene in a layered structure. The team also developed a proprietary manufacturing process that allows the material to be assembled directly into the batteries. Their hard work paid off. While current graphite-based anodes offer a capacity of 372 mAh/g, SiNode Systems’ material can be customized to achieve capacities between 1,000 mAh/g and over 2,500 mAh/g, delivering longer-lasting batteries. In addition, the use of graphene in SiNode Systems’ materials enables more rapid Li-ion transport for faster charging.

In addition to responding to market demands for better-performing batteries, the team applied a sustainable lens to their development process for environmental and business reasons. Their efforts not only help the planet, they save the customer time and money.

“From our initial experiments, we strived to find green alternatives to toxic chemicals typically used in battery manufacturing,” Mayekar says. “Toxic solvents need to be processed prior to the manufacturing process. Our system is designed to use water-based solvents that are safer and easier for anyone working with the material, thereby reducing handling and waste management costs.”

Manufacturers and government agencies are taking notice of the company’s innovative technology and sustainable approach. Last year, SiNode Systems was awarded a $4 million contract from the U.S. Department of Energy and major automotive companies to develop a better car battery.  SiNode Systems will work with the automakers for 30 months to develop technologies that support the commercialization of hybrid and electric vehicles.

The SiNode team is motivated by this recognition. “We’re just getting started,” Mayekar says. “Our team will continue to develop technologies that enhance battery performance while reducing the environmental footprint within the electronics and automotive manufacturing industries.”

The company also shows strong signs of continued growth. “Five years ago, we were a student team with an idea. Today, we’re a viable company with over 15 employees. Our customer traction has grown 50% each year. Our stability allows us to continue developing our technology platform to enable the greater adoption of clean energy solutions in the future.”

Learn how VentureWell’s E-Team Program provided SiNode Systems with the training and resources to move their venture forward.