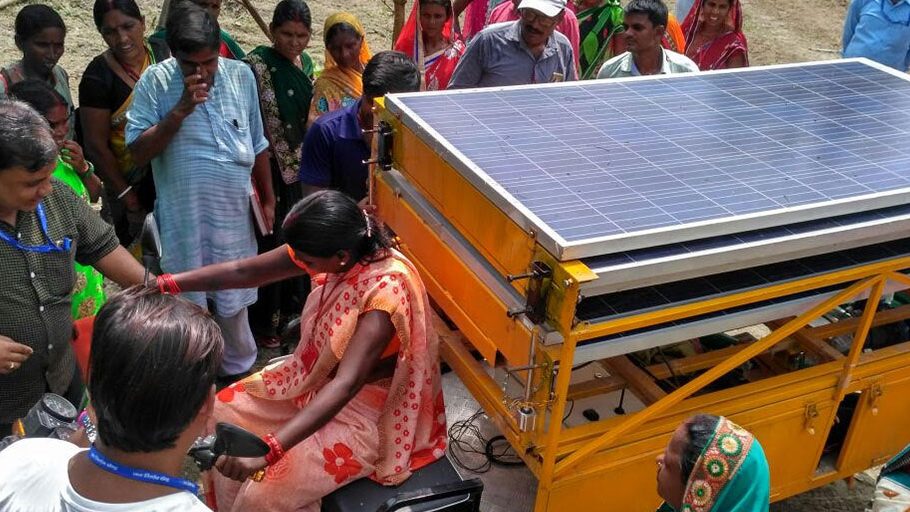 Hurricane Sandy knocks out power along the East Coast in 2012, forcing dozens of public water systems to issue boil orders. That same year, severe drought over a third of the country hobbles power plants and limits energy production. Two very different events, miles apart, but underlying both is the often overlooked connection between water systems and energy supplies, the so-called water-energy nexus. It’s a link that in the years since has become even more crucial as both resource systems face new strains.

“The interdependencies between our water and energy systems are clear—and becoming more prominent,” notes the U.S. Department of Energy, which analyzed the relationship in its 2014 report The Water-Energy Nexus: Challenges and Opportunities. “Water is used in all phases of energy production and electricity generation, and energy is required to extract, convey, and deliver water and to treat wastewaters prior to their return to the environment.” Looking forward, the consequences of climate change are bringing new scrutiny to this vital link, while at the same time presenting opportunities for entrepreneurs working to bring fresh ideas and greater efficiencies to each system. To mark United Nations World Water Day, March 22, we spoke with three ventures operating where energy and water meet, and where innovation could bring dramatic improvements to the lives of millions.

When VentureWell E-Team grantee Katya Cherukumilli, a postdoctoral fellow at the University of Washington and founder of the non-profit Global Water Labs, was beginning her PhD work at the University of California at Berkeley in 2013, her advisor suggested she take on a problem that affected at least 10 million people. Turns out, the problem she chose to address—excess fluoride in drinking water—affects more than 20 times that number.

Fluoride, the mineral that’s intentionally added at low levels to toothpaste and drinking water in the United States to prevent dental cavities, occurs naturally at higher concentrations in groundwater around the world, causing a host of serious health issues, including crippling skeletal fluorosis in children. Cherkumilli soon learned that existing filtration technologies are energy intensive, costly, and complex to implement, especially in the poor rural settings in India and Africa that are disproportionately affected by the problem.

Cherukumilli’s work reveals the reach of the water-energy nexus. “When people typically think of the relationship between energy and water, often the primary focus is on pumping costs or water distribution,” she explains. “I became heavily focused on water treatment processes and the embedded energy costs of the adsorbent materials used.” Specifically, she set out to develop a defluoridation filter media that could be sourced locally, processed using less energy, and be scalable for use by impoverished local communities. She found her answer in bauxite ore, which happens to be found in the same regions of the world that have endemic fluorosis. Currently, bauxite is industrially processed into activated alumina, a commonly used and expensive adsorbent for fluoride. “Bauxite is much less expensive than the industrially refined activated alumina,” she explains. “We also had huge energy savings, because you don’t need to process the raw ore as much to get to the highly refined activated alumina state.”

Using her bauxite-based method, Cherukumilli is able to reduce fluoride levels to below the World Health Organization limit of 1.5 parts per million. She is now working in her lab at UW and with NGO partners in Kenya and Tanzania to find the most effective and translatable filter configuration for field operation. Having raised more than $120,000 for her work through social entrepreneurship avenues in the past year, she plans next to refine and field-pilot the filter prototype, begin testing for removal of additional contaminants, hire her first employee, and enlist new field partners in other affected areas of the world.

In India, pumping water for agriculture consumes up to one-fifth of the country’s energy, roughly half from the power grid and half in diesel fuel. Eight years ago, Powering Agriculture Xcelerator participant Soumitra Mishra and his partners at Claro Energy set out to change that, introducing small-scale off-the-grid solar systems that allow local farmers to power their pumps more reliably, cheaply, and sustainably using the country’s abundant sunshine. “We quickly became famous,” Mishra recalls. “Every politician was looking at us to help them craft a policy program for their state. Because it was really a challenge to provide power in the rural areas.”

Solar pumps were just the beginning for Claro Energy, founded by Mishra and his Northwestern University classmate Kartik Wahi, along with Gaurav Kumar. Driven by the demands of the water-energy nexus in India, the company now has some 130 employees, working out of 5 offices in 11 states, and has installed roughly 10,000 solar pumps across the country. And their offerings continue to expand as they better understand local farmers’ needs. With a USAID grant, they developed 50 mobile solar “trolleys” (with another 50 on the way) that poorer farmers can hire like an Uber. “They call us, and our folks go to the field, make the connections with the pumps and power, irrigate their fields, and charge them on a metered basis,” explains Mishra, adding that the data allows them to offer irrigation guidance as well. Claro also developed lightweight solar panels and pumps that can be rented by farmers and easily carried to a site. And they set up community mini-grid power stations to provide energy for agricultural processing and other local industries.

“We realized that farmers wanted to operate other things that they were using diesel for, like rice mills, flour mills, reverse osmosis units for drinking water, and spice grinders,” says Mishra. “And that consumed a lot of power in the villages.” Claro now runs five of its own mini-grids but manages an additional 15 for other companies. Often the first infrastructure in a rural village, the mini-grid stations have become centers of commerce, a gathering place for farmers, bankers, and other local merchants.

More recently Claro has expanded its economic development work, purchasing farmer’s crops and transporting them for sale to wholesalers, a relationship that “is stabilizing and increasing the demand for our irrigation service and mini-grid business as well.”

Once water has been pumped, treated, and piped to customers, it still has one more stop in its energy-intensive journey: the municipal sewage treatment plant. And as Contraire founder and E-Team grantee Rabecca Wiseman notes, that last stop can be a costly one. “It takes 10 times as much energy to treat sewage as it does drinking water,” explains Wiseman, who is also an environmental engineering graduate student at Oklahoma State University. “Wastewater treatment plants consume 1 percent of our total electricity. There’s so much organic matter and so many pollutants in the water that we have to get out.”

Contraire has devised a system that can dramatically improve that, specifically by optimizing the efficiency of a treatment plant’s aeration blowers, the air pumps that keep the water tanks churning so the beneficial microorganisms can do their work. Using industrial sensors that measure water quality in real time, the company developed a predictive algorithm that lets municipalities fine tune when those energy intensive blowers are actually needed.

Contraire partner Brooks Robison explains that, at present, testing water quality takes as long as five days, so plants run the blowers essentially nonstop. “They are really flying blind,” he says. And since running the blowers accounts for as much as 75 percent of a plant’s costs, optimizing their efficiency can have a real payback. For a city such as Stillwater, Oklahoma, where Contraire plans to launch a pilot program next year, it translates to an estimated 45 percent reduction in electrical costs, or about $300,000 annually.

The original idea for Contraire’s work began with Wiseman’s OSU master’s advisor and VentureWell Faculty grantee, Dave Lampert. “His passion is quantifying the water-energy nexus and finding inefficiencies in it,” she says. “We found that if we implemented our technology throughout the United States, we could save the CO2 equivalent of 12 million cars a year. So that’s when we started kicking it into gear.” The team took part in the VentureWell E-Team Grant program, where it explored creating a green supply chain, and hopes to complete the NSF I-Corps program this summer.

At a proposed cost of $48,000 a year for Contraire’s sensors and services, Brooks notes that municipalities could begin to see savings from the first month. Wiseman adds that the response from potential customers has been overwhelmingly positive (the venture also won the Love’s Entrepreneur’s Cup and the Queen’s Entrepreneurs’ Competition) but that municipalities first want to see their pilot results. “So we want to get some really good data from Stillwater and hopefully start fully commercializing then.”

Like the work of Claro Energy and Global Water Labs, Contraire’s efforts show the opportunities that exist in the water-energy nexus. As climate change puts new demands on both resources, innovative thinking will be needed to make that connection more resilient—as the basic needs of millions are at stake.